4 Highly Valuable Resources That You Possess

Improbable as it may seem at the moment, we are living at a time of unlimited potential.

Never before have we experienced such growth in the number of younger. and older entrepreneurs for that matter, who desperately want to be working for themselves instead of all their hard spent creating wealth for someone else.

While there is no shortage of people in love with the idea and searching for an opportunity to throw caution to the wind and sculpt their dream career , we have to ask what it really takes to bring the dream into reality.

In looking at what resources you have to pursue something, is money the most important resource or are there a few other arrows in the quiver which will have the most effect on your goals? Of course asking yourself “how much money do I have” is a wise question to ask, however, it may not be your greatest asset.

In a recent article by Chris Widener, he talks about four highly valuable resources available to anyone but unfortunately underutilized and deployed by most.

He first talks about “Desire” and how “everything that comes from life comes from wanting it…really wanting it. A desire for something deep in your heart, not merely a wish or something you’d grab if it was right there in front of you. 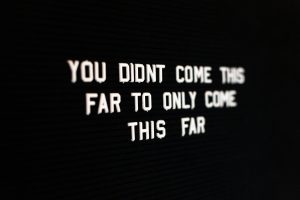 Next, the author identifies “Vision” or the ability to see what it is you really want in the grand scale. Maybe not in granular detail, but the clear idea of what you want even if it isn’t there yet physically. If you can see what you want, you will attract the money or whatever else you need in order to realize your [email protected]

The third resource aside from money is “Persistence.“ There isn’t much more to say here than to ask how many times have you lost the prize in life, even though you worked as hard as anyone, because you did not work long enough. You did not persevere.

And finally, there is “Courage.” Do you believe in yourself and your dreams or will you back away from some risk involved in achieving your goals? It’s a simple as that. The world is filled with pretenders and those who’ve slunk into the background of the status quo. It is those who forged ahead no matter how much money they had, because they had a dream.

They reached their dream of freedom. independence. and accomplishment because they had the courage for it.

If you take an honest look at yourself, I think you’ll see these four wonderful qualities shining through your reflection.

Have the courage to put them to use and the money will enter stage left in its rightful place in a supporting role.

Are You Trying To Figure Out How To Make More Money And Continue Doing Things You Enjoy?

Wondering Where The Time Has Gone?

Living Beneath Your Potential?